Sacha Baron Cohen has revealed he was “scared” that something ‘uglier’ could have come from Borat 2‘s infamous Rudy Giuliani scene.

The moment in question saw Maria Bakalova, in character as Borat’s daughter Tutar, interview the former mayor of New York in a hotel room, before taking the conversation into the bedroom.

Speaking to Ben Affleck for Variety‘s Actors on Actors series, the actor explained how he was hiding in a cupboard before receiving a message to storm into the room and interrupt them in character as Borat. 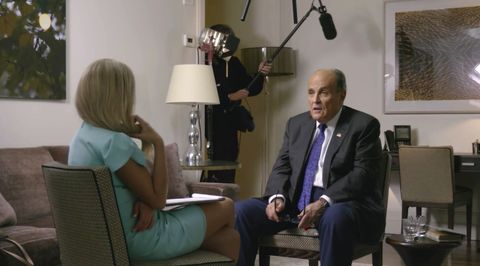 Related: Borat 2‘s most shocking moments – did they really happen?

“I really wonder whether you came running in because you thought, ‘If I let this go any longer, something really horrible is going to happen,'” said Affleck.

“I never thought that he was actually going to go into the room with her,” Baron Cohen replied.

“I mean, I was hoping for the movie they would, but also as a producer and a director, I have an actress there who I need to look after — and protect as well — because we’re putting her in a situation with a powerful man who may or may not have been in this situation beforehand.

“I got the instruction to run in there,” he added. “I didn’t know that he was on the bed.”

“It was shocking!” said Affleck. “And it appeared as ‘we better go in now, before this turns into something that is so horrible that we can’t even put it in the movie — it becomes evidence in a court case,’ or something.”

“Yeah,” Baron Cohen replied. “We were scared that it would veer into an even more ugly situation.”

Giuliani has called the scene a “complete fabrication”, writing in part on Twitter in October: “At no time before, during, or after the interview was I ever inappropriate. If Sacha Baron Cohen implies otherwise he is a stone-cold liar.”

Digital Spy has launched its first-ever digital magazine with exclusive features, interviews, and videos. Access the latest edition with a 1-month free trial, only on Apple News+.