By Christopher Stevens for the Daily Mail

A great title can really sell a show. It’s hard to imagine that after 60 years we’d still be watching Florizel Street, as telly’s longest running soap was nearly known — yet call it Coronation Street and it becomes a snapshot of working-class Britain.

But it’s a mistake to come up with a brilliant title and then try to construct a programme around it. That appears to be what happened with The Chasers Road Trip: Trains, Brains And Automobiles (ITV).

Someone in a production office hit upon that pun, playing with the name of the Steve Martin movie. After that, all they had to do was round up a few champion quizzers and shoehorn them into a concept. 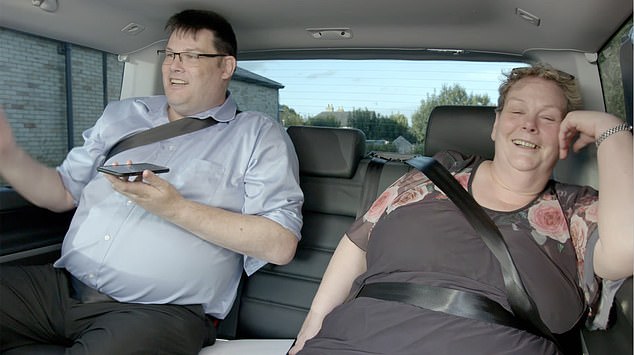 Mark ‘the Beast’ Labbett and Anne ‘the Governess’ Hegerty in The Chasers Road Trip: Trains, Brains And Automobiles

Finding the quizzers was easy. Bradley Walsh’s teatime show The Chase has a stable of them, and they’ve performed well in their own gameshow, Beat The Chasers.

Shaun ‘the Dark Destroyer’ Wallace, Anne ‘the Governess’ Hegerty and Mark ‘the Beast’ Labbett all enjoy sending themselves up, and they weren’t afraid to get stuck in to an adventure. But back at ITV HQ, the clever ideas had dried up.

The trio were given a Winnebago, because an unbreakable law says that whenever three television personalities go travelling — chefs, comedians, sports stars, etc — they must always drive a giant, unsteerable camper van.

This gag has been worn out by Gordon Ramsay and his chums Fred Sirieix and Gino D’Acampo. To see the Chasers struggling at the wheel veered from excruciating to plain dull. ‘I’m really not enjoying driving, that was not fun,’ commented Mark, and there was nothing amusing about the way he said it.

Topping of the night:

Charles II’s favourite breakfast, revealed on Natural History Museum: World Of Wonder (C5), was scrambled eggs with shavings of ambergris or half-digested squid from the belly of a sperm whale. I’ll just have mine with HP sauce, thanks.

To give their road trip a theme, the Chasers visited research centres studying animal intelligence. First, they met a bonobo or pygmy chimp called Kanzi, and tried to memorise the pictograms he uses to communicate. Kanzi’s memory was far better.

They tried a similar test against a chimp named Ayumu, who can memorise nine-digit number sequences in a fraction of a second. Ayumu won easily . . . and so did Katie, an orangutan who loves the video table-tennis game Pong.

If we’d learned something about how these brainy apes use these skills to communicate with humans, this U.S. jaunt might have had some meaning. But it was relentlessly shallow throughout, the only point being to show that trained animals can do things humans can’t . . . however smart they think they are.

By the time the trio went swimming in Florida, to demonstrate that dolphins are better at tricks in water, I’d lost all interest.

The title of the pub sitcom starring David Mitchell and Robert Webb, Back (C4), acquired a new layer of meaning as it returned for a second series.

Written by Simon Blackwell, it’s an awkward hybrid — a classic comedy setting, filled with characters who wouldn’t be out of place in The Vicar Of Dibley, but with a dark psychological undercurrent. Webb plays Andrew, who claims to be the long-lost foster brother of Stephen (Mitchell) and wages a series of nasty mind games to tip him into alcoholism and depression.

Meanwhile, wouldn’t you just know it, Stephen’s mum is only having an affair with the vicar, which causes some embarrassment around the breakfast table.

Whether you can stomach the lurches from pitch-black humour about mental illness to banter about fizzy drinks in the bar depends chiefly on how much you enjoy Mitchell and Webb as a sitcom double act. Fans of their previous series, Peep Show, might love it. I can’t say I do.