Gigi Hadid has revealed the name of her baby daughter.

The top model welcomed a little girl with former One Direction singer Zayn Malik in September last year, and have so far kept the details under wraps.

But Gigi finally announced the moniker the pair picked for the little one, changing her Instagram bio to “khai’s mom”. 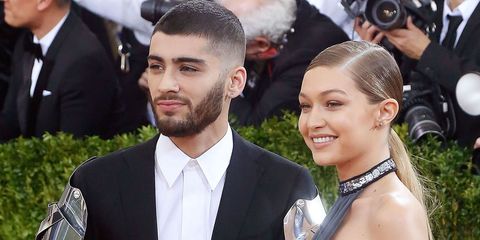 It’s been reported the name has a connection to Gigi’s paternal grandmother, who is called Khairiah. Gigi’s sister Bella Hadid also has the middle name Khair. For Zayn’s birthday recently, Gigi posted a sweet tribute to him on her social media.

“Team No Sleep,” she wrote. “Happiest birthday to our Zaddy baba. So special.

“Love you long time, thank you for makin me a mamma to the best girl ever. Wish you the best every single day.” The couple started dating back in November 2015, with Gigi appearing in his ‘Pillow Talk’ video the following January.

Zayn spoke about his relationship with the Victoria’s Secret model back in 2016, when he said they were a couple who weren’t bothered about partying. “I don’t really enjoy going out too much and partying,” he said.

“I like to have my own time and be at home, and I kind of need a partner with me to do that. I just like the security of that. It feels good to me. It feels right.

“Netflix and chill. Yeah, we do that a lot.”

Digital Spy has launched its first-ever digital magazine with exclusive features, interviews, and videos. Access this edition with a 1-month free trial, only on Apple News+.