If you’re reading this, it’s a safe bet to assume you’ve hung out with Mario and his pals at least once in your life. Whether you were revving up karts, hitting the tennis courts for a few sets, or attending those cruel parties where every coin and star you had was stolen (no, I’m not mad), Mario’s non-platforming multiplayer shenanigans need little introduction. The Mushroom Kingdom crew has seen more adventures than most across a variety of disciplines, and we’ve often been able to bring our friends along for the ride. Yet, despite Mario’s rich multiplayer history, the main Super Mario games have historically been a mixed bag in this department.

Mario’s 2D adventures gained co-op consistency in the last decade, but it wasn’t until Super Mario 3D World that 3D entries truly brought multiplayer to life. Offering four-player local co-op back on the Wii U, it’s arguably Super Mario’s multiplayer platforming peak, and with online being added to the Bowser’s Fury Switch port, we’ll potentially soon have our hands on the definitive package. We’re less than a month away now from launch, and with that in mind — spin-offs aside — we’ve decided to take a look back the history of Super Mario’s multiplayer…

Discounting the formative single-screen two-player action of the non-Super Mario Bros., few will need reminding of how it all began with Super Mario Bros.. Considering the technology of the times, two-player functionality was understandably limited. With Luigi acting as a palette swap for Mario, players would simply switch turns upon losing a life across the game’s eight worlds, and that’s as far as it went.

Despite featuring almost identical mechanics (difficulty aside), this ‘multiplayer’ element didn’t carry over into The Lost Levels, although Luigi was available separately, offering an increased jump but reduced friction over the ground. Its western replacement, Super Mario Bros. 2, let you choose between a whopping four characters, although it was also a solo affair.

Super Mario Bros. 3 saw the return of pad-switching multiplayer but this time around, you’d take turns whilst exploring the overworld map. Much like before, Luigi was a Mario palette swap but the game featured some expanded options like a remake of the aforementioned Mario Bros. arcade game and stealing cards from each other, but ultimately it didn’t add a lot in multiplayer terms. Nintendo maintained a similar approach with Super Mario World, though World’s ‘sequel’ Yoshi’s Island (a significantly different game) discarded it completely.

It was never implemented in the final release but when Mario made the 3D transition in Super Mario 64, Shigeru Miyamoto experimented with multiplayer. Speaking in interviews, he said two-player support was planned with Luigi but ultimately scrapped — a result of the N64’s hardware limitations. Later clarifying they had also planned a Mario Bros. style mini-game, that too was canned.

The lack of multiplayer functionality in the finished product hasn’t stopped fans making their own over the years, though, even if the outcome of these projects was all too predictable. It’s only officially received that multiplayer support of any kind via the DS remake, which included new mini-games and a competitive VS. Mode.

Much like 64, Super Mario Sunshine was a solo adventure. It wasn’t until Galaxy that a 3D entry finally included an option to get a second player involved, taking a co-op approach which basically meant sharing your controls. Player One controlled Mario and Player Two could aim, collect and shoot Star Bits, enabling them to hit enemies and offer a helping hand (Mario could also jump higher if both players pressed ‘A’ at once). A fun, subtle addition, but perhaps too minimal — hardly the sort of ‘proper’ multiplayer action available elsewhere. Galaxy 2 built upon this, letting players control an orange Luma that could attack enemies, but it a gentle variation on the theme.

The real multiplayer breakthrough came with Super Mario’s return to 2D. Launched between both Galaxy games back in 2009, New Super Mario Bros. Wii built upon the success of its DS predecessor and we finally saw Miyamoto’s dream of co-operative Super Mario realised. It allowed four-players to join in the main story and create what the designer called a “meaningful group experience”. That isn’t to say the DS game had no multiplayer, not at all, but it was more focused on mini-games and a competitive mode. 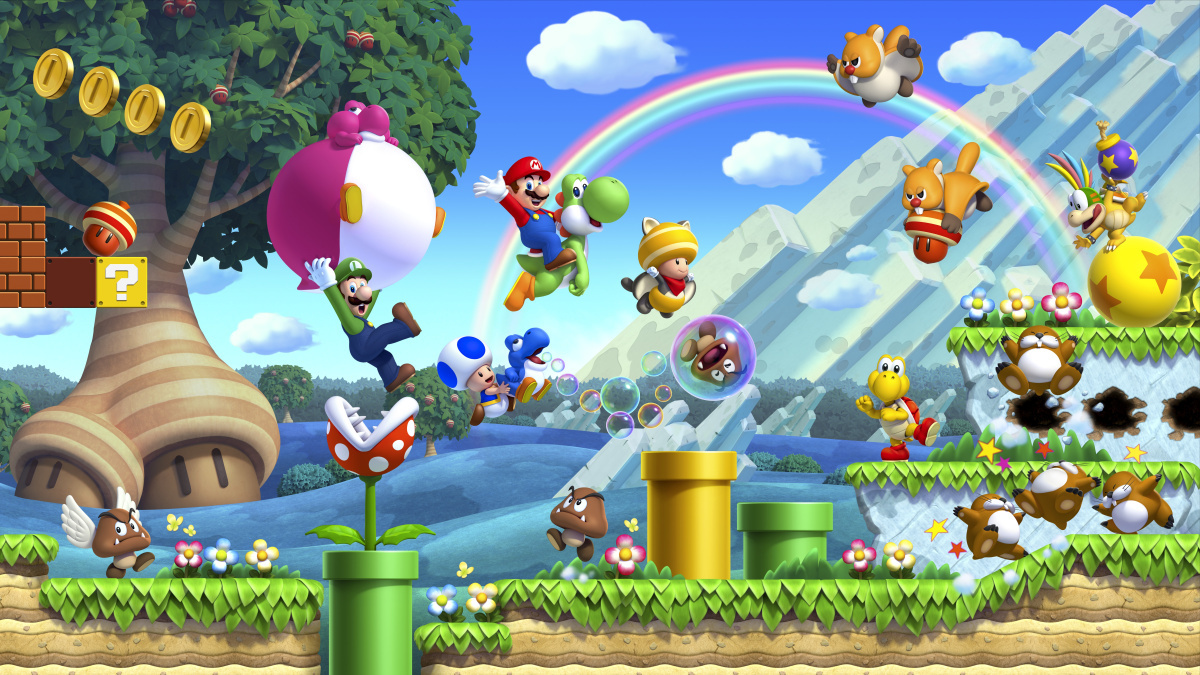 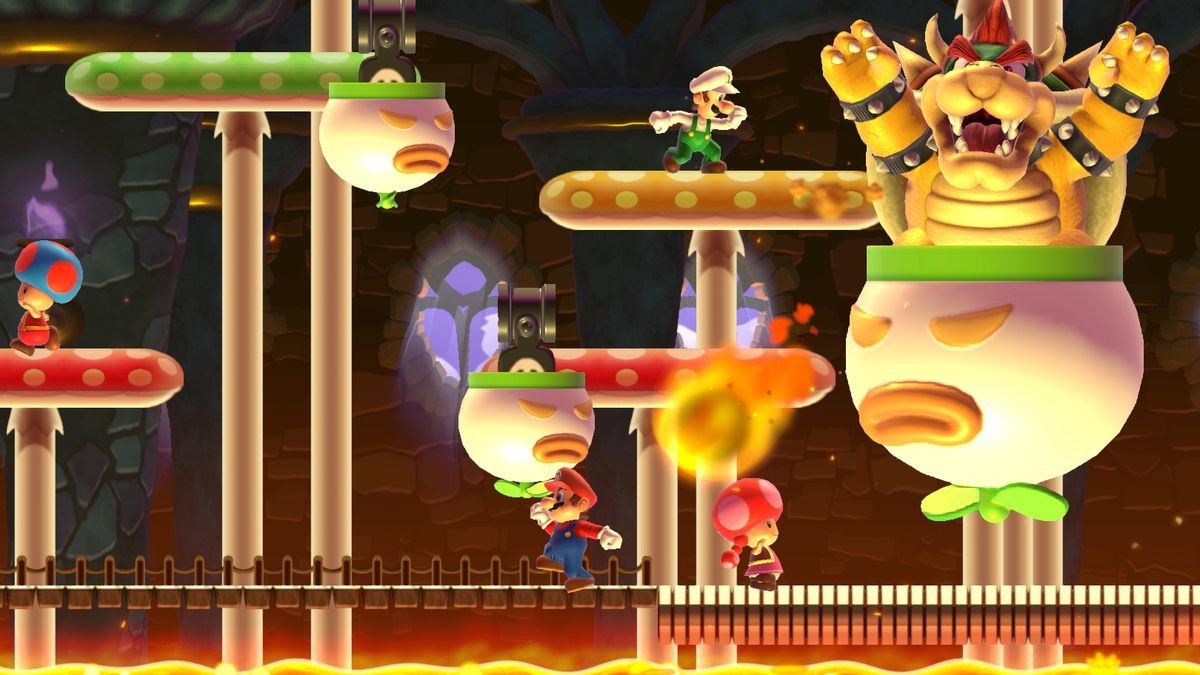 The potential of Mario co-op was clear and set a path which future 2D entries followed. New Super Mario Bros. 2 on 3DS continued offering story mode co-op with a two-player option but the Wii U follow up built upon that framework and enabled a fifth player to join in via the Gamepad. Called ‘Boost Mode’, the GamePad user could place blocks across the level, helping out (or hindering) the other players as they navigated the course. Due to change in hardware, it got removed in the Switch’s Deluxe edition, but made for some great fun at the time. We’ve not seen a new entry in that particular since, though the battle royale peculiarity that is the limited-time Super Mario Bros. 35 arrived last year for Nintendo Switch Online subscribers and delivered a competitive brand of online multiplayer using the original game as a template.

In fact, it’s a fair assessment to say Super Mario Maker has replaced the ‘New’ sub-series to an extent, giving us custom level creation tools and the ability to share courses online. Despite the community aspects, it was single player-only originally, but back in 2019 Super Mario Maker 2 added a considerable number of tools to Mario’s multiplayer belt. We said at the time that it’ll likely be the last 2D Mario game you’ll ever need, and for good reason; featuring expanded stage options and four-person multiplayer — both locally and, eventually, online — how Nintendo will evolve this template further (beyond streamlining the experience) is difficult to imagine.

Nintendo has always been able to pull off surprises and going back to the 3D entries, solo experience Super Mario 3D Land laid the groundwork which Super Mario 3D World built upon. Carrying over various gameplay elements from 3D Land, this was the game to finally introduce us to fully-fledged co-op in three dimensions. Though limited by the Wii U’s poor sales, it was a critical hit and also utilised Miiverse (R.I.P.) community features and a two player “Luigi Bros” game based on Mario Bros. was also present.

It was almost disappointing to see this expansive co-op functionality removed in Super Mario Odyssey, though speaking frankly, it’s not really a fair comparison. They share the Super Mario name, sure, but each game plays very differently, and Odyssey’s sandbox approach meant this was better suited to single player. Much like Galaxy, it chose a lighter co-op option, letting a second player control Cappy independently of Mario. You also have a separate online minigame option with Luigi’s Balloon World. Players hide a balloon within a kingdom and others would then have to find it within a set time limit. A fun diversion, absolutely; just not a particularly expansive one.

Super Mario isn’t a particularly consistent franchise when it comes to multiplayer, but across the decades it’s certainly offered a means to connecting with other people. As many of us remain homebound at present, that ability is more important than ever, making 3D World’s upcoming online options even more valuable for Switch gamers. Miyamoto never lost sight of his original goal, bringing us experiences which two people can play together, and it’s slowly been realised. Whatever route Nintendo takes, we’re looking forward to seeing where our favourite Italian plumber goes next.

Let us know below your favourite Super Mario multiplayer experiences over the years.