Nesbitt takes the leading role in the newest police drama from Mercurio as a detective re-investigating the cold case of an assassin who killed his wife.

The series is filmed and set in Belfast, which also doubles as the headquarters for AC-12 in Mercurio’s smash hit crime thriller Line of Duty.

Series creator Chris Brandon told the Radio Times that working in Belfast all these years has given Mercurio an “intimate” knowledge for the people and the culture – which is one of many hallmarks viewers will recognise.

“At its key, it’s really about relationships. I think it’s something that audiences will invest in, invest in the characters,” Nesbitt added.

“But also, it is a classic Jed Mercurio thriller, where you’re not really sure what’s going on, with many different stories interwoven into it.

Nesbitt, who is from Ballymena in Northern Ireland, expressed hopes that the show will give viewers a look at what Belfast looks like 20 years removed from the Troubles. 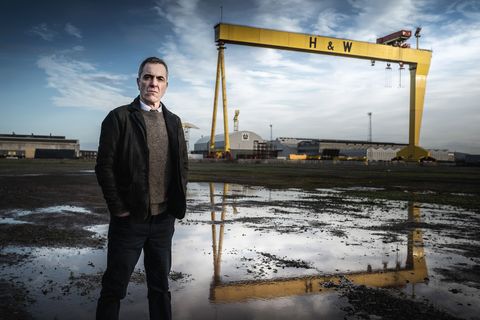 “We’re seeing Belfast in a new context, we’re seeing a more contemporary city,” Nesbitt noted. “It is a cat-and-mouse thriller but the fact that it has the legacy of the Troubles brings an added depth to it.”

Bloodlands will be airing soon on BBC One. Line of Duty will also be returning this spring on BBC One. Series 1-5 are available on boxset now.