The Duchess of York has been seen for the first time since her grandson was welcomed into the world on Tuesday.

Sarah Ferguson, 61, commonly known as Fergie, made her appearance in a video which she shared on her Youtube Channel the same day that her daughter, Princess Eugenie, 30, and son-in-law Jack Brooksbank, 34, welcomed their baby boy.

The Queen’s granddaughter had husband Jack at her side at The Portland Hospital in central London where their son – the Queen’s ninth great grandchild – was delivered at 8.55am yesterday, weighing 8lbs 1oz.

Ever the working girl, Fergie, who posts videos daily as part of her Storytime with Fergie and Friends series on her Youtube channel, shared two clips – one yesterday and one this afternoon – although it is not clear when they were both filmed.

In the video posted on Tuesday, the now grandmother-of-one can be seen reading Sniff: Unicorn Fart Book by Buddy and Barney, while today she shared a tutorial on how to make unicorn magnets. 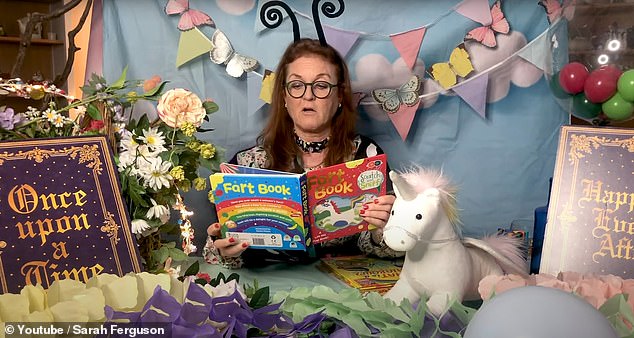 The Duchess of York Sarah Ferguson, 61, has shared two videos on Youtube following the birth of her grandson after it was announced Princess Eugenie, 30 and Jack Brooksbank, 34, welcomed their first child yesterday 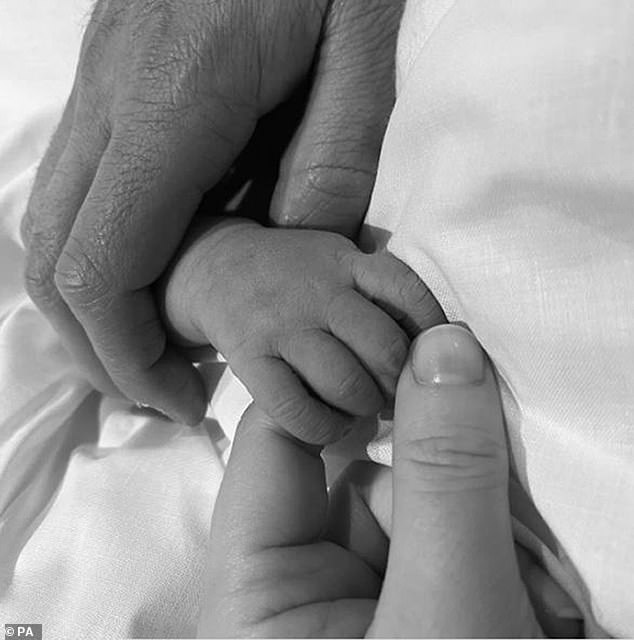 The Queen’s granddaughter had husband Jack at her side at The Portland Hospital in central London where their son – the Queen’s ninth great grandchild – was delivered at 8.55am yesterday, weighing 8lbs 1oz. She broke with tradition and shortly shared a picture of her and Jack holding their son’s hand to Instagram, pictured

However, there’s indication that Fergie may have known the arrival of her grandson was imminent as she repeats the words ‘grandpa and grandma’ with great emphasis several times throughout the video – perhaps in a hint Eugenie was about to give birth.

Eugenie and Jack broke with tradition and shared a black and white photo to Eugenie’s Instagram of their baby boy, who is 11th in line to the throne, showing them holding his tiny hand.

Proud new mother Eugenie followed the post with three blue hearts after welcoming her son at the luxury private hospital where Meghan Markle also gave birth to her son, Archie. 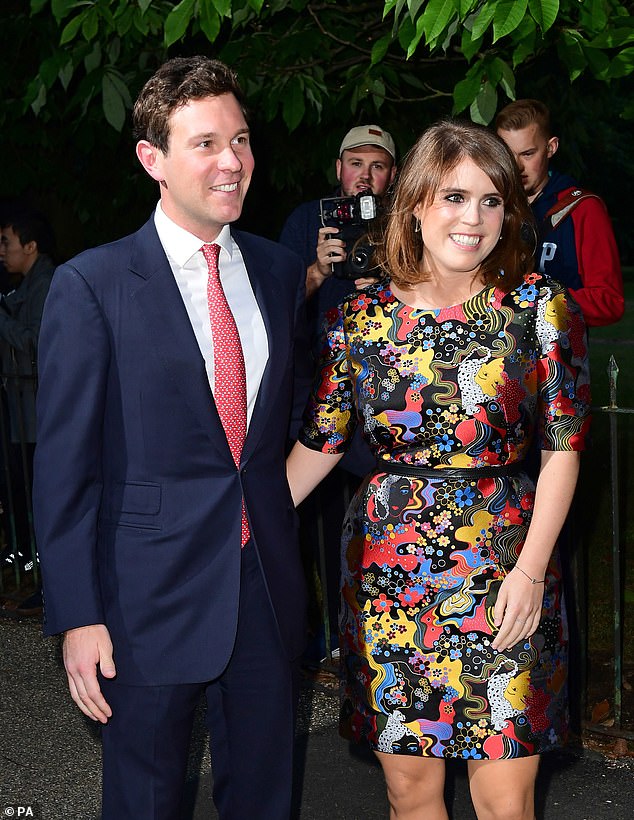 Eugenie and Jack, who married in October 2018, are yet to reveal the name of their firstborn. Pictured, attending the Serpentine Summer Party 2017 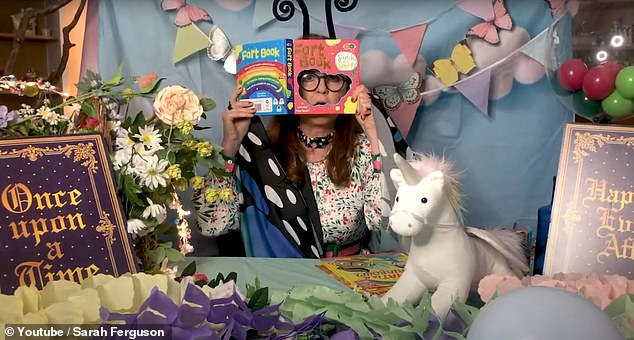 The Queen, The Duke of Edinburgh, The Duke of York, Sarah, Duchess of York, and Mr and Mrs George Brooksbank were delighted with the news, Buckingham Palace announced, adding that ‘Her Royal Highness and her child are both doing well’.

This is Princess Eugenie and Jack Brooksbank’s first child, The Duke of York and Sarah, Duchess of York’s first grandchild, and the ninth great-grandchild for The Queen and The Duke of Edinburgh, but will not have a royal title.

The Duchess of Cambridge’s younger brother James Middleton was among the first to congratulate Eugenie and her husband, a tequila brand ambassador, writing on Instagram: ‘Such wonderful news’.

Lady Violet Diana Louise Manners also ‘liked’ the post, while Clarence House sent their well-wishes and penned: ‘Congratulations to Her Royal Highness Princess Eugenie and Jack Brooksbank on the birth of their son.’

Eugenie’s pregnancy was revealed in November, with a traditional announcement from Buckingham Palace, as well as an Instagram post from the happy couple.

Sharing the news, Eugenie, 30, wrote: ‘Jack and I are so excited for early 2021….,’ alongside photos of baby slippers and her and Jack smiling.

Sarah Ferguson shared her excitement, writing: ‘I am so excited by the news that Eugenie and Jack are expecting their first child.

‘Thrilled for them both and in my 60th year cannot wait to be a grandmother. Welcoming a new baby into the York family is going to be a moment of profound joy.’

Although the baby is the first biological grandchild for Prince Andrew and Sarah Ferguson, they are step-grandparents to Wolfie, the son of Princess Beatrice’s husband Edo Mapelli Mozzi. 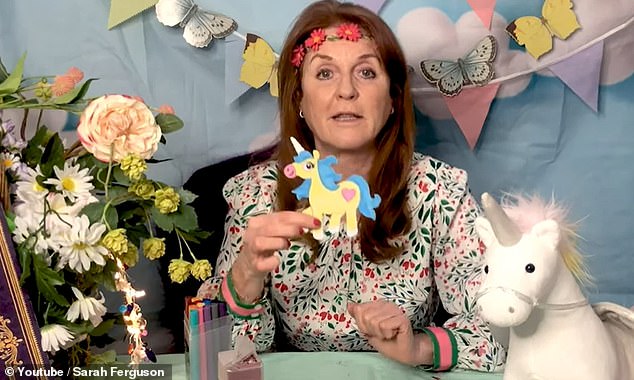 Sarah Ferguson has not yet spoken publicly of the birth of her first grandchild. Pictured in a tutorial on unicorn magnets posted today

When Eugenie’s pregnancy was announced, a spokesman for the duchess told the Mail that while she was clearly overjoyed at Eugenie’s news, she also wanted to stress that she and Andrew very much saw Beatrice’s stepson, Wolfie, as a grandchild too.

‘Wolfie is already a very much-loved member of their family and the duchess is very keen to stress that she sees Wolfie as their grandchild too,’ they said. The three-year-old is Mr Mapelli Mozzi’s son by a previous relationship.

Eugenie and Jack’s child will be 11th in the order of succession, which means the Queen’s youngest son Prince Edward will slip down a place into 12th place.