Steve Coogan, Hugh Quarshie, and Sharlene Whyte will star in a three-part sequel to the groundbreaking 1999 drama, The Murder Of Stephen Lawrence.

Entitled Stephen, the ITV series has been endorsed by the murdered teen’s parents Doreen and Neville Lawrence, played in the 1999 original by Marianne Jean-Baptiste and Hugh respectively.

The drama will portray events starting from 2006, 13 years after 18-year-old Stephen’s death on the evening of 22 April 1993 in a racially motivated attack whilst waiting for a bus in Well Hall Road, Eltham. 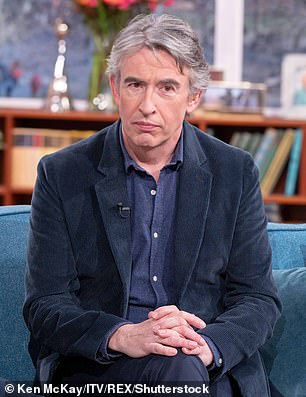 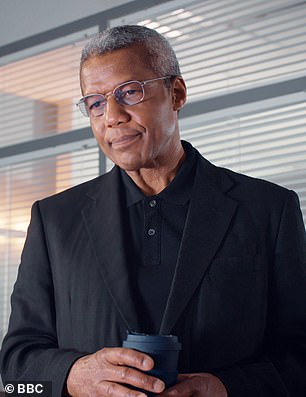 Cast: Steve Coogan, Hugh Quarshie (above), and Sharlene Whyte will star in a three-part sequel to the groundbreaking 1999 drama, The Murder Of Stephen Lawrence

While Hugh, 66, will reprise his role as Neville Lawrence, We Hunt Together star Sharlene will take on the role of Doreen Lawrence in the new drama.

Steve, 55, plays DCI Clive Driscoll who led the murder investigation and worked with the Lawrences to put together an investigation that – more than 18 years after his death – secured the convictions of two of the gang who committed the murder.

Richie Campbell, Jordan Myrie, Sian Brooke and Adil Ray will also take roles in the production which will commence filming later this month in London.

The production team are producing the sequel with the full support of the Lawrence family. 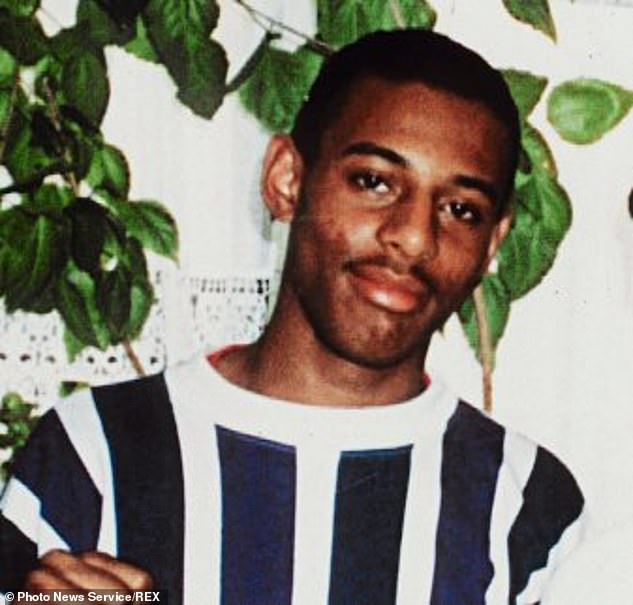 Continuation: The drama will portray events starting from 2006, 13 years after 18-year-old Stephen’s death on the evening of 22 April 1993 in a racially motivated attack whilst waiting for a bus in Well Hall Road, Eltham [Stephen is pictured] 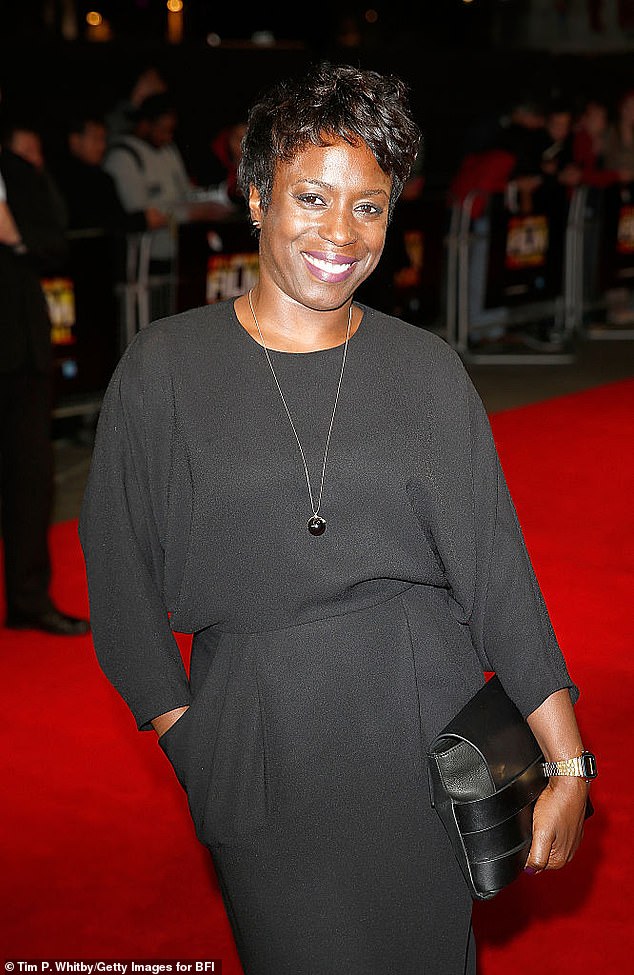 Executive producer Mark Redhead said: ‘It’s a privilege to be working with Doreen and Neville Lawrence to tell this chapter of the story of their campaign for justice for Stephen. It’s a story that moves and inspires and is ever more resonant and relevant today.’

Director Alrick Riley added: ‘The case of Stephen Lawrence is a testament to the fortitude, persistence and determination of the Lawrence family. These films will chart the successes, disappointments and the emotional toll they endured.

‘It’s also the story of Clive Driscoll, the lead detective, who managed to forge a friendship with the Lawrence’s over the years it took to achieve two convictions. It’s an honour to have the opportunity to tell their story.’

Even though the Lawrences knew the identity of their son’s killers, the original investigation failed to convict those responsible. 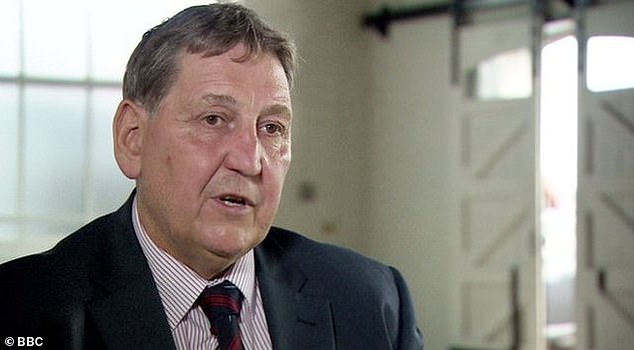 Police: Steve will play DCI Clive Driscoll – who worked closely with the Lawrences to put together an investigation that finally – more than 18 years after his death – secured the convictions of two of the gang who committed the murder of Stephen

Their extraordinary campaign for justice led to a public inquiry which branded Metropolitan Police institutionally racist and brought about sweeping changes in the law and police practices and transformed thinking and understanding of racial inequality in the UK.

Yet six years on from the Inquiry no progress had been made into the case.

The drama tells the story of the ongoing struggle by Doreen and Neville to achieve justice with DCI Driscoll.

Producer Madonna Baptiste said: ‘The Lawrences’ campaign for justice totally transformed attitudes to race and equality in the UK and it’s an honour to be able to help tell what is an untold chapter in their story. 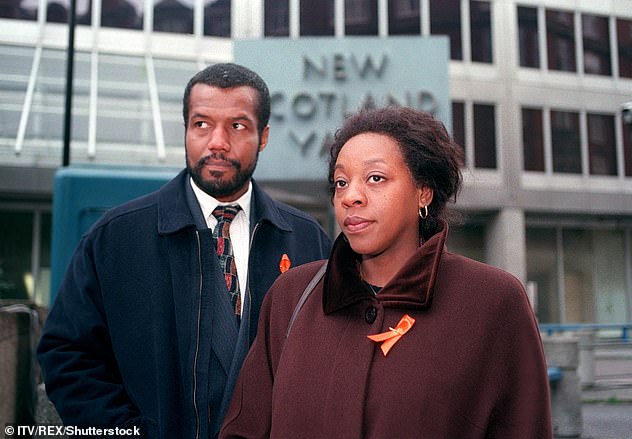 Sequel: The groundbreaking drama The Murder Of Stephen Lawrence won a BAFTA for Best Single Drama [pictured are Hugh Quarshie as Neville Lawrence and Marianne Jean-Baptiste as Doreen Lawrence in the 1999 drama]

‘Current events only highlight how relevant and important Stephen’s case remains and it is such a privilege to work with Hattrick, Frank and Joe Cottrell-Boyce, Alrick Riley and our amazing cast to bring this important story to screen.’

Paul Greengrass, award winning screenwriter and director, who wrote and directed The Murder Of Stephen Lawrence in 1999, will also serve as an Executive Producer, as will Line Of Duty’s Jed Mercurio.

‘I hope that the film and the drama which has been commissioned will provide some insight into what we went through and give some hope to others that justice can eventually prevail.’

His father added: ‘I welcome the announcement of this new TV series by ITV, made with members of the same team who wrote and produced the 1999 original drama. 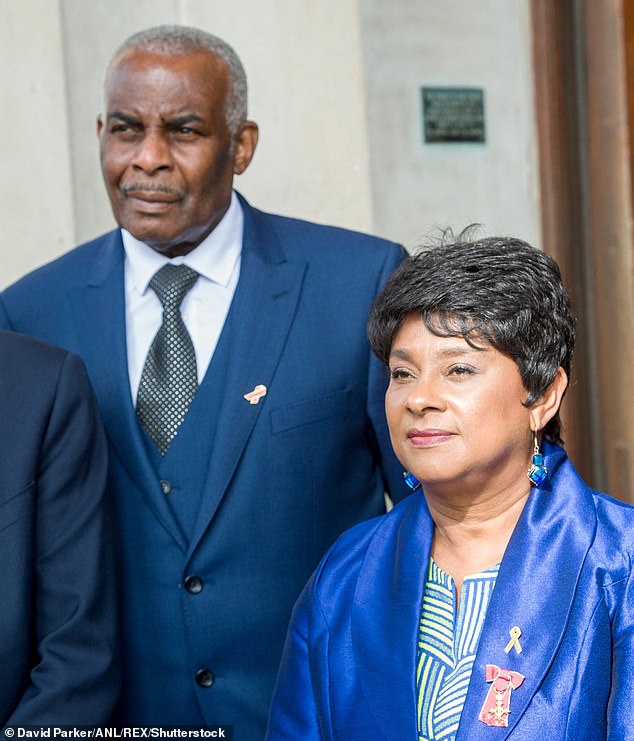 Fight for justice: Doreen and Neville’s extraordinary campaign for justice led to a public inquiry which branded Metropolitan Police institutionally racist and brought about sweeping changes in the law and police practices

‘That first film was important in telling Stephen’s story. It is important that the next part of the story is told, particularly at a time when, thanks to the Black Lives Matter campaign, concerns around institutional racism are so prominent.

‘The recent BLM protests have served to remind people that black men and women continue to be subjected to racially motivated attacks. It was true when Stephen was killed and it still happens.

‘It has always been my view that the most powerful response to racism is non-violent resistance and I am heartened to see people from all backgrounds who have come together peacefully across the country to show they will not tolerate racist attitudes. I hope this new film will further help raise awareness.’

The original drama won a BAFTA when it originally aired in 1999.

Neville and Doreen fought for justice after charges against her son’s killers were at first dropped, with Nelson Mandela even meeting Doreen in London following the murder.

Stephen’s death, and the controversial police investigation, became a watershed moment in British race relations and led to the Metropolitan Police being publicly damned as ‘institutionally racist’.

It would be four years before an inquest was held into Stephen’s death, when a jury returned a verdict of unlawful killing in a completely unprovoked, racist attack.

The gang of five suspects all refused to answer any questions at the inquest, and still the police seemed powerless to prosecute. 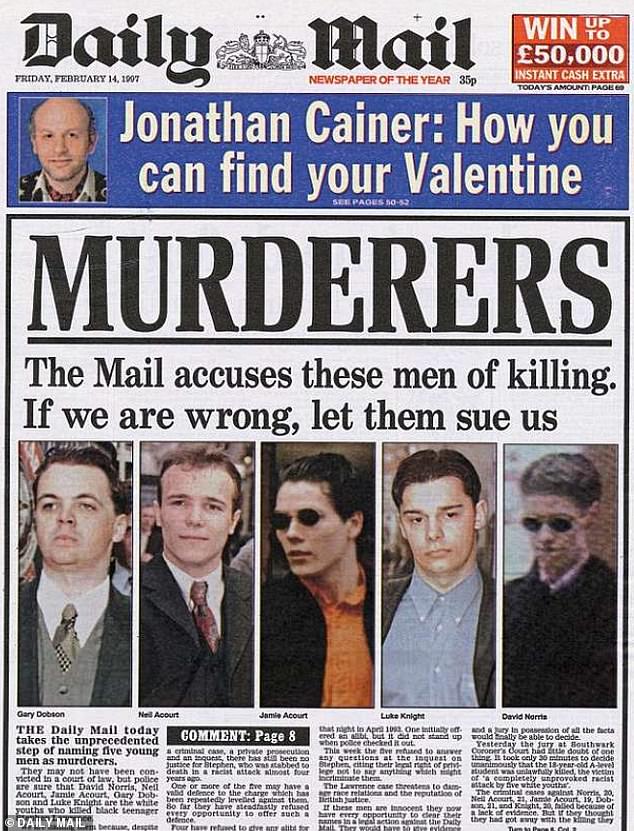 Determined not to let the five escape scot-free, the Mail took an unprecedented step. Their pictures were published on the front page, on 14 February, 1997, under the headline: ‘MURDERERS. The Mail accuses these men of killing. If we are wrong, let them sue us.’

None of the five took legal action over that headline. In the public eye, their silence no longer protected them: it was as good as an admission.

The effects of that front page were momentous. A far-reaching inquiry into racism within the Met followed, with the Macpherson Report of 1999. That report also led to changes to the law that ended the ancient legal tradition of double jeopardy, the rule that a suspect could not stand trial twice for the same murder.

Two of the five accused by the Mail, Gary Dobson and David Norris, stood trial for Stephen’s murder in 2011, following a ‘cold case’ review, and in the light of ‘new and substantial evidence’, they were found guilty and jailed for life.

Norris had been convicted and jailed with another of the five, Neil Acourt, for racially aggravated harassment, in another case. 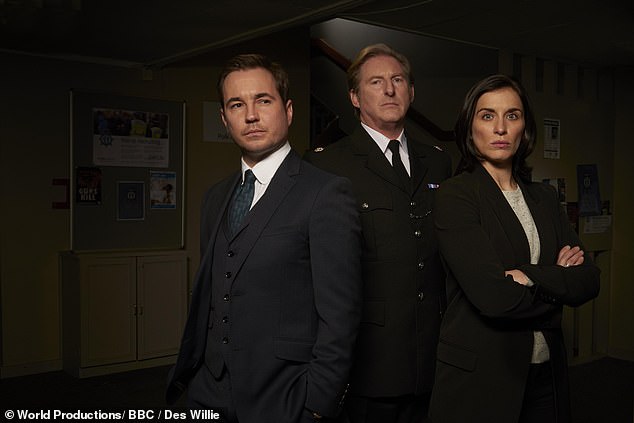 The best in TV: Line Of Duty’s Jed Mercurio will serve as an Executive Producer