CHRISTOPHER STEVENS reviews the weekend’s TV: It’s as appealing as a cruise after seeing The Poseidon Adventure

By Christopher Stevens for the Daily Mail

The location of a remote beauty spot in the Northern Ireland crime thriller Bloodlands (BBC1) is being kept secret by producer Jed Mercurio.

He fears a tourist stampede could trample the isolated nature reserve, one of 100 islands in Strangford Lough, southeast of Belfast.

Jed needn’t have worried. Bloodlands does for the Ulster tourism industry what disaster movie The Poseidon Adventure did for cruise ships.

For a start, that island is a lump of barren turf in an icy lake. It’s probably great for gulls looking for a place to nest where weasels and foxes can’t get their eggs. But it’s an awkward spot to choose for burying bodies. 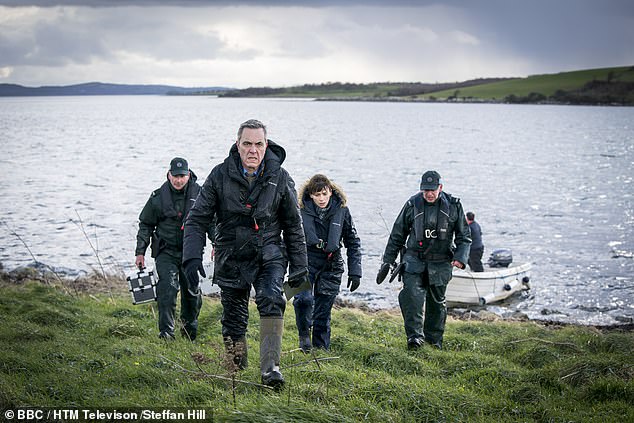 Cold Feet star James Nesbitt plays Tom Brannick, a veteran copper whose wife Emma disappeared more than 20 years ago. She was an undercover agent investigating terrorism, and the rumour is she was bumped off by a serial killer in the police force.

Acting on a tip-off that her grave is on the island ‘between the bothy and the tree’, Brannick turns up at dawn with a spade and a forensics team (a ‘bothy’ is a hut, if you don’t speak Norn Iron).

But our hero digs in the wrong place. He fails to spot that there are, in fact, not one but two trees on this blasted rock. Some detective. Meanwhile, the serial killer is back in business, leaving his signature calling card — a picture postcard of two derelict cranes on a deserted dock. Wish you were here, or what?

Jed’s really going out of his way to make sure no one who sees Bloodlands will ever want to visit the Six Counties. Why couldn’t he choose a card showing the Giant’s Causeway, or that mural of the Derry Girls on the side of a pub?

Jumbo gift of the weekend:

The first episode of this four-part thriller ended with Brannick and his partner Niamh (Charlene McKenna) raiding a tatty rural hotel, decorated in Fawlty Towers chic. The carpets were nylon and the doors were plywood. You didn’t need to see the breakfast buffet to know it would be cold scrambled eggs and that juice made from dried orange powder.

Nesbitt has two modes as an actor, Tough Guy James and Lovable Jim. He was displaying his full range here — eyes narrowed as he ransacked the office of a former IRA chief, then goofy smile as he played the doting dad who drops in to surprise his student daughter at every hour of the day.

The plot doesn’t make a lot of sense, though it rattles along so briskly that we don’t have to worry too much. Bloodlands won’t be the most memorable serial of the year . . . but the Northern Ireland Tourist Board will be quite glad about that.

If you’re looking for something memorable, try brain training with a chimp. Chris Packham showed us on Animal Einsteins (BBC2) how apes can not only count but remember a nine-digit sequence flashed up on screen for just half a second.

This extraordinary experiment featured on The Chasers Road Trip on ITV last month but Chris explained the science behind it far more clearly. Early humans probably had photographic memories, like chimps, he said — but our brains ditched that skill to make room for language.

Humans fared badly in this fascinating round-up on animal intelligence, the first of six. A two-year-old New Caledonian Crow proved better at solving puzzles and making tools than a five-year-old child.

It has taken our species just 1,000 generations, Chris pointed out, to go from stone knives to Mars missions.

Give the crow 1,000 generations of evolution and it, too, might be capable of anything. Birds have a head start — they won’t need to invent the aeroplane.