Nicola Walker has been on a rollercoaster ride, filming the new series of ITV’s acclaimed crime drama Unforgotten – and the journey’s not quite over yet.

She’s well aware that speculation will be rife as to who the killer is, over the next seven or eight weeks, and is living in fear of revealing their identity!

‘You have no idea how much I worry about doing so,’ confesses Nicola, who plays troubled detective DCI Cassie Stuart in the long-running, cold case whodunnit.

‘It’s like my nerves are buzzing and there’s a part of me which is going to reveal the killer’s identity at any moment during an interview, quite possibly on live TV.’

Nicola is actually keeping many secrets in her head, not just the identity of the person who killed Matthew Walsh, a young man who went missing in March 1990 and whose decapitated body is found in a freezer at a scrapyard in the first episode. 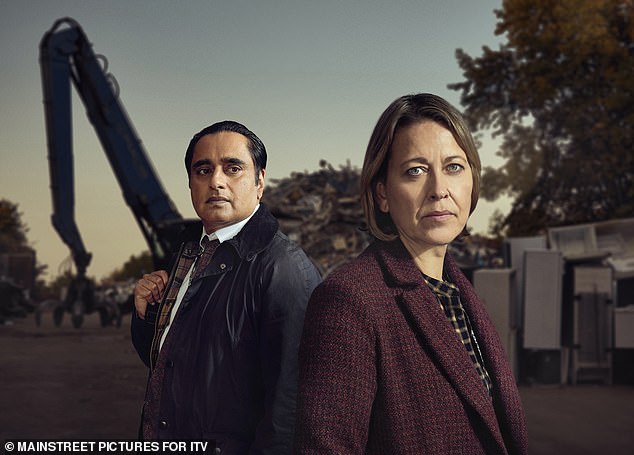 Like the previous three series of Unforgotten, which attracted audiences in excess of seven million and brought BAFTA success for guest actors Sir Tom Courtenay and Mark Bonnar, Chris Lang’s six-parter is littered with carefully concealed surprises, all of them relevant to the Walsh case, all of them slowly revealed in the TV equivalent of a forensically-peeled onion.

The murderer appears to come from a group of people to whom viewers are introduced in episode one.

Father-of-two Ram Sidhu is a successful businessman, who lives with his wife Anna in London. They are expecting their first child together.

Academic Liz Baildon (Susan Lynch) and her fiancée Janet are based in Cambridge, where she rides around on a sit-up-and-beg pedal bike and combines work and home life with the considerable demands of her ageing mother, played by Sheila Hancock.

Therapist Fiona Grayson has a practice in the Peak District, where she lives with her partner Geoff and their children.

Dean Barton, another successful businessman, shares a palatial home in Rochester, Kent, with his wife Marnie, their disabled son, Jack, and his younger brother, Casper. 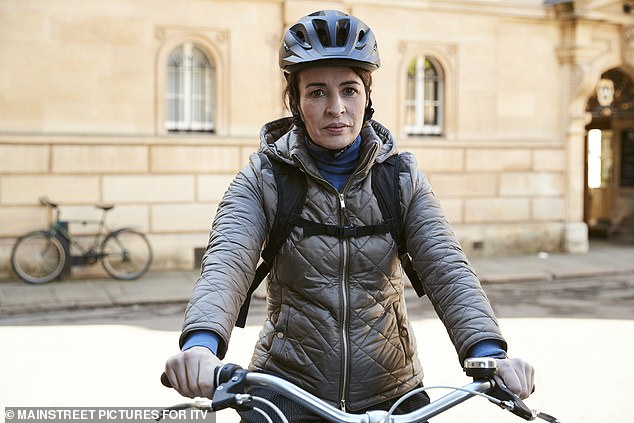 The murderer appears to come from a group of people that viewers see in episode one – Ram Sidhu, academic Liz Baildon (above), therapist Fiona Grayson and Dean Barton 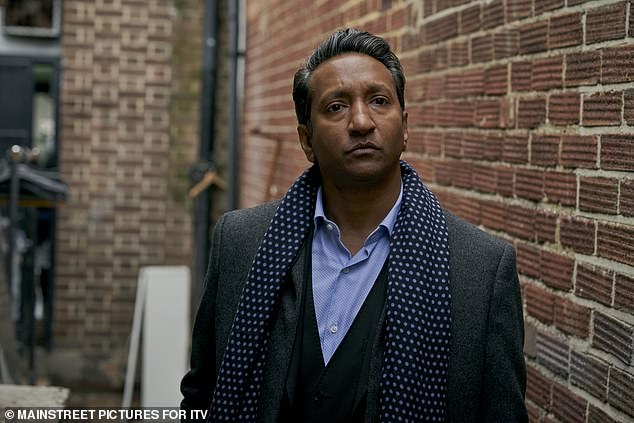 Father-of-two Ram Sidhu (above) is a successful businessman, who lives with his wife Anna in London. They are expecting their first child together

All in their late forties, the four of them appear to be in a good place, but the investigation into Matthew Walsh’s death has the potential to shatter their reputations, family relationships and the lives they’ve built over the last 30 years.

To begin with, the hunt for Matthew’s killer is led by Cassie Stuart’s colleague DI Sunny Khan (Sanjeev Bhaskar).

As Nicola explains, Cassie is off work, the stress of nearly 30 years in the police, much of it solving brutal, cold case murders, taking a huge toll on her mental health.

‘When we left Cassie at the end of the last series she felt it necessary to stop, she definitely had what would have been loosely termed ‘a breakdown’ and we were wondering if she were ever coming back.

She doesn’t really want to but she is in this terrible position where she will lose a massive amount of her pension pay out on a technicality if she doesn’t complete several more months of service. So she returns – reluctantly.’ 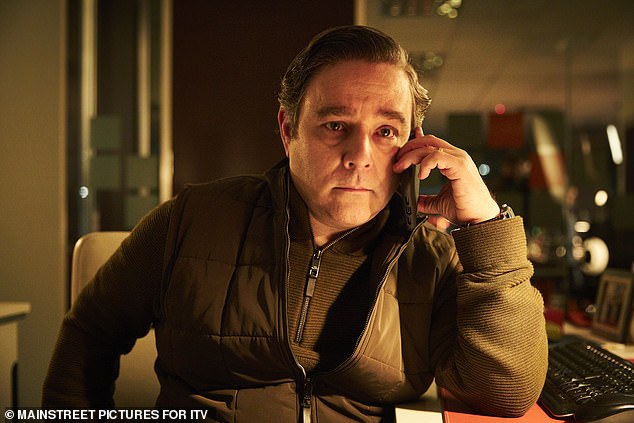 Dean Barton (above), another successful businessman, shares a palatial home in Rochester, Kent, with his wife Marnie, their disabled son, Jack, and his younger brother, Casper

Nicola, twice a BAFTA nominee for her performance as farmer Gillian Greenwood in BBC1 drama Last Tango In Halifax, also had reservations about returning to work, when filming on Unforgotten resumed post-lockdown in September.

‘We’d got to within five or six weeks of completing filming, before we locked down last March, and I was really nervous about coming back, scared because I didn’t know how filming was going to be handled. I wasn’t sure I was going to feel safe.

‘But the whole thing was handled brilliantly and by the end of the first day I was thinking, “Ok, this is good, they’ve gone above and beyond the call of duty to ensure we aren’t going to come to any harm.” It was a huge relief.’

Nicola counts her blessings that they were able to complete filming but accepts that things were not perfect. Physical interaction between characters, for example, went out of the window – so too close contact with co-stars. 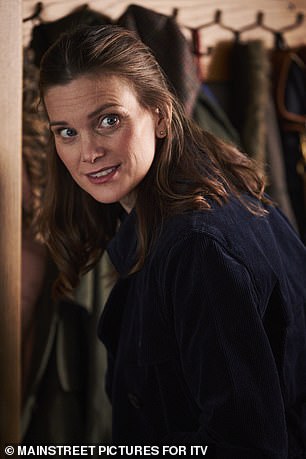 Therapist Fiona Grayson (pictured) has a practice in the Peak District, where she lives with her partner Geoff and their children

The actress has become good friends with Sanjeev Bhaskar and former Ever Decreasing Circles actor Peter Egan, who plays Cassie’s father Martin, during the five years of filming the series and was desperate for hugs with both of them.

‘During the first three series of Unforgotten, I’d spend a lot of my time just grabbing Sanjeev at every opportunity so I did find it incredibly strange to be socially distanced from him on set, we both did.

‘And Peter is just the most extraordinary man. Day one, series one, we were sat upstairs at Cassie’s house, by a small plug-in heater, waiting for the scene downstairs to be set up, and within 15 minutes of starting to talk to Peter I was in love with him and crying because both of us were talking about our respective parents and…. well, he’s just the sort of man you tell things to!

‘I felt sorry for him because an actress he’d just met had started weeping over him! But he could take it – his shoulders are very broad and his compassion is endless.’

Sadly, that isn’t the case with Peter’s character. The onset of dementia has been accompanied by the emergence of a more cynical side in the personality of Martin Stuart, which manifests itself during a fractious dinner party in episode one, during which he accuses his daughter of being a sponger and trying to cheat the taxpayer by taking her police pension a little before she reaches 30 years of service.

‘Her father’s condition is breaking her heart and – coupled with the problems she has with the police – making life very difficult for her,’ says Nicola, who refuses to be ground down by playing such a troubled character. 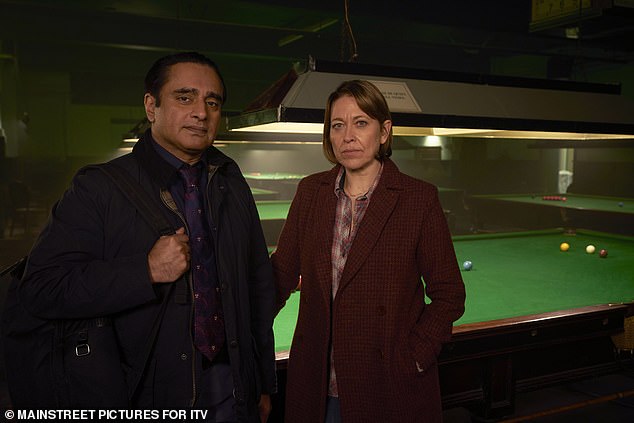 ‘I draw a line between her and me – always have done. There’s no doubt I carry Cassie around with me during filming and there is a feeling of something coming off your shoulders when the job ends.

‘But if what she is going through affects me, in any way, I want to show that on camera and through my acting, not in real life.

‘That said, my family – my husband and my son – definitely know when I’m playing the part. I’m just not as available to them as I normally am, because I am giving so much time to the work and half my brain is thinking about what I am going to be doing on set the next day.

‘Trying to be on top of the words and the trajectory of the story, that is what is taking up a lot of my head space.’

The six-month hiatus, during the two blocks of filming, allowed Nicola to free up some of that head space, as she locked down with actor/writer husband Barnaby Kay and their teenage son, Harry.

‘Barnaby and I realised that we had to make the most of having our son with us 24 hours a day at a time when, naturally, he would be pulling away from us and spending more time with his friends. I think we made the most of that time and continue to do so.’

If a bonus year with her son has been a gift of lockdown, so too the chance to celebrate her 50th birthday last May without the slightest hint of fuss or performance.

‘We’re not big in our family on birthday celebrations and I’m certainly not,’ says Nicola. ‘But I think, under normal circumstances, I might have been expected to do something celebratory for my 50th.

‘As it was, I really got away with it! I did absolutely nothing for it, apart from spend time with my husband and son, and go on a massively long dog walk. That was it and it was the best birthday I’ve ever had, an absolute delight!’

Unforgotten starts on Monday, February 22 at 9pm on ITV