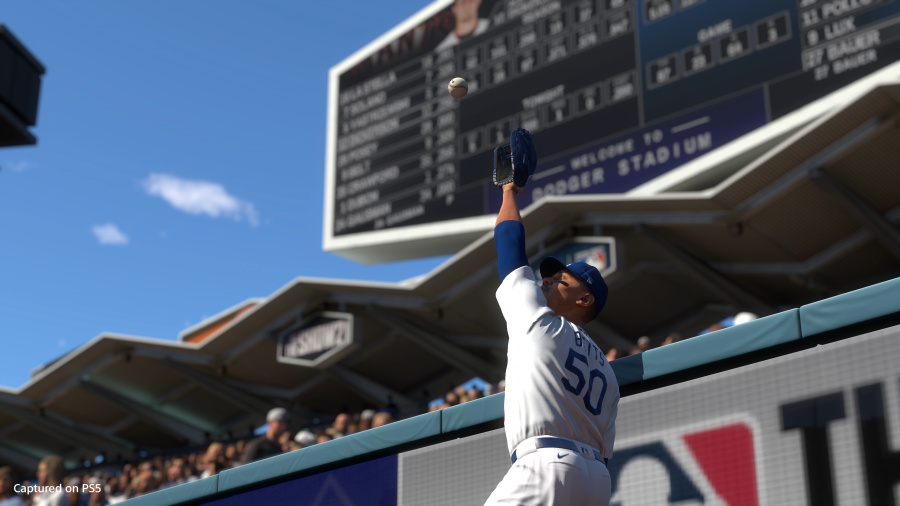 Sports games, for all the ire they attract, subscribe to some of the most brutal development cycles in the industry. Spare a thought, then, for Sony San Diego, which has not only transitioned from one platform to four with its annual baseball simulation MLB The Show 21 – but it’s also done it during a global pandemic. There are clear compromises as a consequence, but fortunately the series is working from such strong foundations that it’s still relatively easy to recommend.

As always, it’s out on the field where this year’s release excels. A plethora of new fielding animations, including a total rewrite to the way players react to off-the-wall balls, mean that this an outstanding simulation of America’s game. Pinpoint pitching adds Skate-like gesture controls to the action on the mound, and while this does take time to master, it rewards patience and practice with the most accurate pitching mechanic in the game.

Ripping home runs has never felt better either, with the release leveraging the DualSense in subtle but satisfying ways. Make perfect contact and you’ll feel the bat rattle through your fingertips, as the ball soars into the stands. There’s also support for 3D audio, so you can hear the calls from the umpire behind you, as well as coaches screaming words of encouragement from the side-lines. Honestly, close your eyes and you can almost feel the California sunshine beating down on you as you wait patiently at first base inside Dodgers Stadium.

Unfortunately, open your eyes and you’ll be brought back down to Earth. Despite an overall increase to resolution, the series’ visual presentation is aging, and is in serious need of an upgrade. The presentational flourishes, such as replays and transitions, still match NBA 2K21 in terms of replicating real-world broadcasts – but the player models and turf leave a lot to be desired. This is no longer the graphical standard-bearer for sports games on consoles.

Similarly, Sony San Diego’s generosity seems to be diminishing. While we’d still argue Diamond Dynasty is the best card collecting mode of its kind, the rewards have unquestionably been dialled down – at least in the first season of content available at the time of review. Stubs, the title’s universal currency, are generally tougher to earn – and free packs come with less frequency than we’d like. Things could change as the release matures, of course, but that’s the state of play right now.

A comparable criticism can be levelled at Road to the Show, which is the franchise’s flagship single player mode. In the past, the developer has pitched [Pun intended – Ed] this as an RPG, where you control your very own player through a rags-to-riches campaign. Unfortunately, it’s been toned down a lot, with glacial progression tied to the aforementioned Diamond Dynasty mode. The developer’s said it will improve this with future updates, but it’s dull to play right now.

The problems stem from the new Ballplayer mechanic, which attempts to unify progression between the two abovementioned modes. While this is a compelling idea in principle, it’s come at the expense of popular options, like the ability to create multiple different characters and take them on unique career paths. The addition of video podcast segments to mark your career milestones are entertaining, but we personally prefer the car crash entertainment of NBA 2K21’s MyCareer mode.

You do have more flexibility in how your player develops this year, as you can create situational loadouts depending on what you want to do. This means that, for the first time, you can create a two-way player capable of both pitching and assuming a positional role, but really all you’re doing is building multiple different loadouts and toggling between them to match your task. It’s fun, but the whole idea feels a bit half-baked.

You could never level that criticism at the Stadium Creator, however, which is absurdly powerful. We’ve already spent several hours fiddling with this, and it really enhances all of the customisation features already found in the game. We’ve always liked being able to design and edit our own uniforms for Diamond Dynasty, but the fact that we can now play our Birmingham Benchwarmers’ home games on a dinosaur island is outstanding to say the least.

And really, despite the criticisms outlined above, you’ve got to give credit to the sheer scale of this package. Franchise, for as much as it has stagnated in recent years, is still bursting with features, allowing you to micromanage every facet of your chosen team – or design an entirely new one from scratch. Diamond Dynasty, as well, has some of the best modes in the genre, spanning both single player and online play. The netcode, despite some launch week server hiccups, is pretty good – and cross-play with Xbox works well.

The menus may feel like they’ve been designed by extra-terrestrials – no humans were harmed in the making of these – and MLB Network reporter Heidi Watney may give you nightmares once you see her model in motion, but these are small prices to pay for one of the best playing sports games on the market.

MLB The Show 21 swings-and-misses in a few areas, with the well-intentioned Ballplayer system diminishing Road to the Show. Despite being stingier, though, Diamond Dynasty is still the best card collecting mode available, and the series’ tried and trusted gameplay has been further enhanced with the addition of Pinpoint Pitching and new fielding animations. Sony San Diego hasn’t quite hit a home run this year, but this is a strong lead-off double for baseball on PS5.