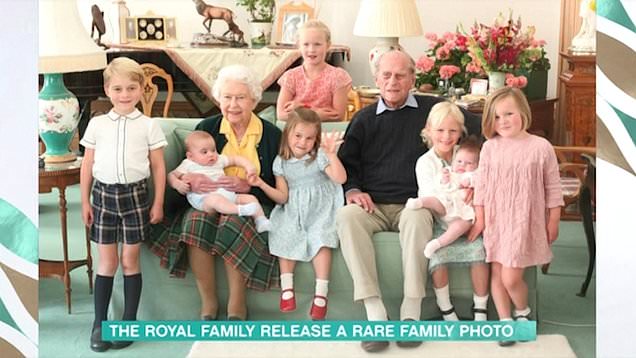 To view this video please enable JavaScript, and consider upgrading to a web
browser that
supports HTML5
video

This Morning has been bombarded with Ofcom complaints after commentator Julia Hartley-Brewer made fun of Meghan Markle’s racism claims on the programme.

The guest joined Alison Hammond and Dermot O’Leary on the show last week, where she mocked the Duchess of Sussex as she commented on a photo of Queen Elizabeth II and the late Prince Philip with seven of their great-grandchildren.

The picture, which was taken at Balmoral Castle in 2018, showed the Queen cradling baby Prince Louis, son of William and Kate, alongside his brother George and sister Charlotte.

Peter Phillips’ daughters, Savannah and Isla, are next to the Duke of Edinburgh, as well as Zara and Mike Tindall’s children Lena and Mia.

Meghan and Prince Harry’s son Archie was born in May 2019 – and during the notorious bombshell interview with Oprah Winfrey, Meghan claimed a senior member of the family ‘expressed concern about his skin colour’ before he was born.

Taking a swipe at Meghan, Julia remarked: ‘I wonder if Meghan [Markle] has managed to take offence to this photograph that doesn’t include her son.

‘Well she probably thinks it’s a racist photograph, taken before her son was even conceived,’ she added. ‘I’m sure she’s managed to take offence at it anyway.’

Fellow guest Nicola Thorpe then interrupted and told Julia ‘she can’t say something like that’ with Julia laughing before responding: ‘I can.’

‘To suggest that Meghan would think that something was racist, something that didn’t even exist at the time, you yourself are kind of pushing this agenda,’ Nicola said.

However, Julia retorted: ‘I’m making a joke pointing out that some people are able to find offence in anything, as it seems she would’ve done after pointing the finger at senior Royals without naming names.’

Television watchdog Ofcom has since revealed that 203 complaints were made about Julia’s comments.

Viewers expressed their fury online at the time the episode aired.

‘Wow wow, now making jokes and laughing about racism and bringing Meghan up and talking bad about her again when nothing was said about her?’ wrote one. ‘Get Julia off our TV screens!’

Echoing a similar sentiment, another blasted: Disgusting remark made by @JuliaHB1 on #ThisMorning – nothing funny about making a comment that is clearly racist!’

This Morning airs at 10am on ITV.

If you’ve got a celebrity story, video or pictures get in touch with the Metro.co.uk entertainment team by emailing us celebtips@metro.co.uk, calling 020 3615 2145 or by visiting our Submit Stuff page – we’d love to hear from you.