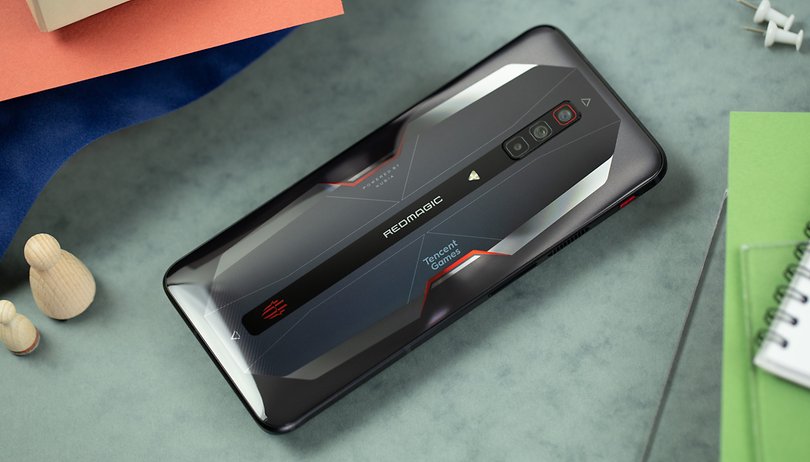 Nubia’s RedMagic 6 smartphone is a mobile gaming device that carries all the bells and whistles which will certainly entice mobile gamers with buzzwords such as a 165 Hz refresh rate for its AMOLED display with a €599 price tag. However, can this ZTE offshoot go toe-to-toe against market leaders like the Asus ROG Phone 5?

A pure gaming design with a display to match

The Nubia RedMagic 6 clearly knows that it is not targeting any other market apart from mobile gamers by letting everyone know right from the start that it is a gaming smartphone. Ticking all of the right boxes to appeal to mobile gamers, it has no intention of reaching out to a more mainstream audience.

I really liked the smoothness of the 6.8-inch AMOLED screen in the RedMagic 6. I didn’t feel any noticeable difference between a 165 Hz and 120 Hz refresh rate as featured on the OnePlus 9 Pro, which is my daily driver. The 360 Hz touch rate, on the other hand, totally transforms the in-game experience by offering a greater degree of responsiveness and precision.

The internal fan is an interesting design choice, but when I was halfway through my gaming sessions and setting it to the fastest speed, I could even hear the fan whirring even when my headphones are in place. The fan also has a smart mode, which adapts its speed based on your usage, resulting in a slightly dampened noise level.

I also liked the red button that is located at the side which allowed me to access the Game Space menu, which is the nerve center of the RedMagic 6 as it allows you to customize the smartphone’s performance depending on the games played. On the other hand, the lack of a USB-C port at the side for charging purposes when you’re using it in landscape mode while gaming is a shame.

Overall, the Nubia RedMagic 6’s design will not please everyone but at the same time, the smartphone is for a niche market only. And it knows exactly how to seduce this target demographic with buzzwords like a 165 Hz refresh rate. We don’t care if it is not noticeable compared to 120 Hz, as the faster it is, the better.

Excellent performance with the Snapdragon 888 SoC

The Nubia RedMagic 6 will obviously be powered by the Snapdragon 888 SoC with Adreno 660 GPU, all mated to 12GB of RAM.

The RedMagic 6 scored very well in the benchmarks that I subjected it to. In terms of raw performance, this €599 smartphone rivals and even surpasses far more expensive Android flagships.

In 3D Mark’s Wild Life Stress Test, the smartphone reached a really hot 55 °C, and the temperature is obviously noticeable to one’s touch. Despite this, frame rates remained fairly consistent throughout the 20-minute benchmark, hovering around 30 FPS.

In terms of raw performance, the Nubia RedMagic 6 is one of the most powerful Android smartphones on the market. The smartphone got very hot during my benchmark tests, but not during my prolonged gaming sessions. I still maintain that the fan is far too noisy despite being especially efficient.

Once again, this is another gaming smartphone that neglects the performance of its camera. Nubia’s RedMagic 6 packs a triple camera setup with a 64 MP main lens, an 8 MP ultra-wide angle lens, and a virtually useless 2 MP macro sensor.

During the day, I found the dynamic range to be wide enough to display a decent level of detail. However, the pictures still look a bit underexposed while the colors are duller than they are in real life.

The ultra-wide-angle lens is no worse than what other Android manufacturers offer at a similar price point, which is actually decent. However, as with its previous models, Nubia still stashes the ultra-wide angle mode away in the Pro mode.

Let’s talk about the zoom performance. It is purely digital and offers 3x, 5x, and 10x levels of magnification. From the first level of magnification, we noticed a loss in detail, but at 5x and 10x, the sharpness level is virtually non-existent while there is too much smoothing applied that the image looks as though a veil has been drawn over it.

At night, the smartphone has difficulty in illuminating scenes properly, and the images tend to be drowned in noise. Strong light sources also tend to burn out the image. Thankfully, night mode does offer a degree of sharpness correction, but you won’t get exceptional shots for sure.

Overall, the RedMagic 6 is not a good camera phone. In fact, it barely makes the mark. If photography is equally important as gaming to you, then you’ll be disappointed.

When gaming with your graphics settings cranked up all the way to the maximum with a 165 Hz refresh rate and the fan blasting at full speed, I managed to game on the smartphone for nearly 5 hours on a single charge. Under normal usage loads (web, calls, video and music streaming), the smartphone generally delivered more than 12 hours of screen time.

As explained earlier, the global version of the RedMagic 6 that is sold in Europe does not include a 66W charger but rather, you get a 30W charger instead. The charging standard is based on Qualcomm’s Power Delivery 3.0 and Quick Charge 4. It does not deliver insane charging speeds, but it is still an improvement over last year’s 18W charger, letting you juice it up fully in a single hour.

The battery life of the Nubia RedMagic 6 is impressive, capable of standing up to the most advanced gaming usage. But its fast charging performance suffers in comparison to the likes of the Asus ROG Phone 5.

Before I get into the specifications of the Nubia RedMagic 6, I’d like to point out that the review unit we received was the Chinese model running on a global ROM. In Europe, the RedMagic 6 comes with a 30W charger and not a 66W charger, features NFC support, while lacking the Tencent Game logo at the back.

There is also the issue of updates – or rather, the lack of it. None of the previous RedMagic smartphones received just one major Android update after their release. The Nubia RedMagic 5G, the flagship smartphone of the brand, has not received any updates since November 2020.

My thoughts about the RedMagic 6 remains similar to last year’s RedMagic 5S. The smartphone knows full well that it targets a niche market that exists, as illustrated in our gaming smartphone poll.

As for that niche market, it remains a very good smartphone with fantastic performance, has a solid battery life, and carries enough processing muscle like a 165 Hz refresh rate, a high degree of customization via Game Space, or the internal fan performance. This is like preaching to the converted, but for those who are about to dip their toes into the gaming smartphone world, this is worth checking out.

If you envision your smartphone as a console, the RedMagic 6 is a great, more affordable alternative to the Asus ROG Phone 5 or the Lenovo Legion Duel. In this case, the poor camera performance should not be a deal-breaker. The only “universal” flaw of the RedMagic 6 is Nubia’s lack of software support,  which is a pox on nearly all gaming smartphones.